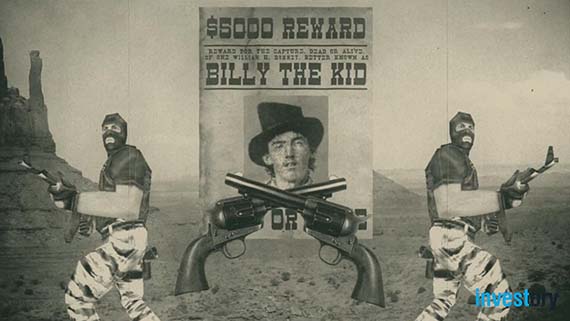 The 2.5 Million-fold ROI and The Legacy of Billy the Kid

How a $2 picture purchased at an antique shop enriched history and the pockets on one savvy investor by $5,000,000.

Return on investments can be slow, normal, fast or fabulous. You don’t believe in fairy tales, do you? Do you want to hear a story of how investments can suddenly increase  two and a half million-fold? There is such a story.

In 2010, a collector of all kinds of antiques Randy Guijarro came into an antique shop in California and spent two dollars there. That was exactly how much the owner of the shop priced a picture of a house, a tree and a bunch of people playing croquet. Like any devoted collector, mister Guijarro decided to find out who those players were.  He came to a conclusion that the man in the picture was no one else but the legendary gangster of the Wild West Billy the Kid and members of his gang Regulators.

The expertise conducted in 2015 confirmed the collector’s opinion. The price of the picture rocketed up to 5 000 000 dollars. The thing is, there had only been one picture of Billy the Kid before that day, which had been sold at an auction in 2011 for 2 300 000 dollars. Now there turned out to be two of them. A scoop. And no scam.

Of course, such stories do not happen very often and their probability equals the chance of finding a needle in a haystack. Nevertheless, visit antique shops from time to time and trust the call of your heart.

Read next: The Vanishing of 7 Million American Children