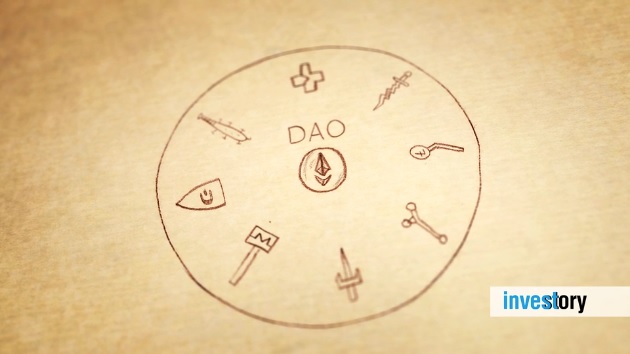 In mid-2016, the Decentralized Autonomous Organization, an autonomous venture capital funding organization that united more than 20,000 owners of Ether, came under attack. A hacker exploited a weakness in the code behind the DAO system and tried to – legally! – transfer about $50 million of cryptocurrency to his account. Despite the hacker’s threats of a lawsuit (which is amusing in itself), the DAO community has voted to create a hard fork in order to overcome the hack and return the Ethers to the owners. A group of programmers, led by Ether inventor Vitalik Buterin, has made changes to the code, breaking the initial ledger while recovering the stolen money and returning it to the rightful owners.

Okay, boys and girls. Let me tell you a story about geeks that are always thinking about something new.

First, there was crowdfunding, which is when many people chip in money to finance a project and bring it to life. Then, Satoshi Nakamoto invented Bitcoin – an electronic currency based on Blockchain technology, a code that is impossible to falsify. Then, Vitalik Buterin took Blockchain and invented Ether, another cryptocurrency… and crypto inventions just kept popping up faster and faster since then.

The most interesting came to life in 2016, when a cryptocurrency crowdfunding organization (The DAO) was created with the support of Ether. Everyone could put their Ethers into this crypto piggy bank and receive a proportionate amount of tokens that gave a right to manage the common money. More than 20,000 investors in the DAO could vote to decide on what to spend their $150 million. It could be anything: startups, charities, or whatever the community wanted.

In the meantime, one sly guy thought about a workaround to use the Ethereum Blockchain ledger to his benefit. He began creating projects and funneling cryptocurrency to his new “child DAO” account… about $50 million was transferred before the geeks that ran the DAO blockchain stopped inventing and began worrying.

The DAO Hacker Story: Ethereum Inventor Saved Us All

Of course, the Ethereum inventor came and saved us all by creating a switch to prevent the hacker from using the stolen Ether. Vitalik broke the initial agreement and created new rules in the process. From that point on, Ethereum was split into Ethereum Classic and Ethereum, following a long philosophical debate about the purity of the fork approach. A lot of good came from that unfortunate incident. Fighting the hack, the Ethereum community fixed a security breach into its system. There are so many daily hacker attacks on Blockchain that the system just has to learn how to rebuff them and use the experience hackers bring to become more secure. May this never-ending struggle be successful for the crypto community.

Read next: Top 6 Cryptocurrency Scams in 2018
Share with friends