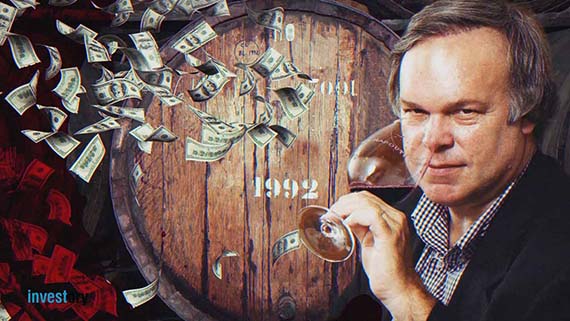 To Drink or to Preserve? Investing in Wine

Is it possible to profit from wine? It is, but it is difficult! Watch and find out what you need to succeed.

“Not enough acid.” “There is no aging potential.” “Needs to be drunk young.” Wine critics gave such assessments to the harvest of Bordeaux of 1982. The wines turned out to be quite unusual, indeed. They had a very dark colour, pronounced taste, and were very fruity. The only person who disagreed with such an assessment was a humble lawyer from Baltimore, Maryland, Robert Parker. In his magazine, “Wine Advocate,” he called it the harvest of that year - calling it exceptional and advised his subscribers to pay close attention to the unique potential of the wines. At the same time, the investments were not so costly. For instance, a bottle of Lafite-Rothschild of 1982 could be bought for $41. The world learned the true value of the timely advice years later. In 2003, the price of the same bottle was valued at $5,000 dollars. A 12950% in 21 years is quite a good reward for patience. Today, Robert Parker is a recognized guru of the wine business; millions of people all over the world follow his advice. He’s a bonafide wine celebrity. In fact, his ratings serve as the basis of the London Fine Wine Exchange’s world renowned index Liv-ex 100 Fine Wine Index. By the way, the annual growth of this index can surpass the Dow Jones indices three and a half times. During 2016, the index increased by 25% and showed continuous growth over 14 months. “In vino veritas,” In wine there is truth. This Ancient Roman phrase remains a likely formula of success today. Wine is a profitable instrument for investing, but only for those who can wait and are ready to come to know the particulars of the industry.

Read next: Ethereum, Bitcoin, Miners and Crypto Fever: How Long Will It Last?
Share with friends