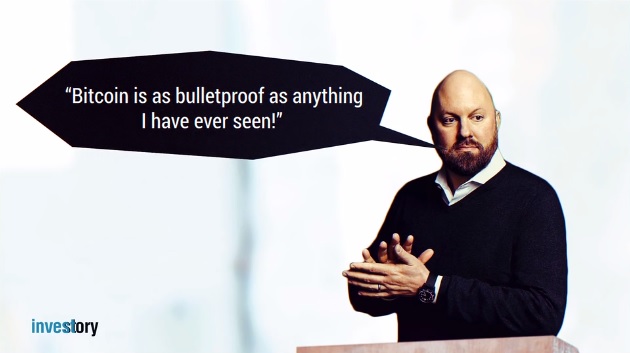 Why Andreessen Horowitz Chose Coinbase and TradeBlock Over Apple Pay

It's no secret that Andreessen Horowitz loves Bitcoin. Back in 2013, the firm helped raise over $25 million for companies like Coinbase and TradeBlock. Since then, that number only continues to get higher. Meanwhile, other top investors are going for more familiar opportunities like Apple Pay. Is there something Andreessen Horowitz co-founder Marc Andreessen sees that everyone else is missing?

In terms of investors, there is no one out there who loves Bitcoin as much as Marc Andreessen. In fact, at a 2014 Bitcoin conference, Andreessen said Bitcoin is “as bulletproof as anything I have ever seen.” Why does he think that way, though? There are plenty of other, more predictable investment opportunities in technologies like Apple Pay. So, let’s try to pick the brain of Mr. Andreessen and see what he truly thinks about cryptocurrency.

What Andreessen Horowitz Sees In Coinbase And TradeBlock

VC firm Andreessen Horowitz contributed fifty million into Bitcoin-related companies like Coinbase and TradeBlock, and recently, they raised one and a half billion USD for other technological projects. You can tell they really believe in blockchain technology, but why? The firm's co-founder, Marc Andreessen, wrote a captivating essay entitled “Why Bitcoin Matters,” in which he compares Bitcoin to major inventions like the Internet.

The Problem With Apple Pay

Sure, Apple Pay does make paying with your credit card easier and more secure. However, is it a revolutionary technology? Too many retailers want to control their transactions, which means they’re less likely to allow Apple Pay into their purchasing process. As a result, Apple Pay’s growth is limited, and limitations don’t make a good investment opportunity. Ultimately, Apple Pay is just trying to promote repeat iPhone purchases, not to revolutionize the payment industry. So, the next time you see Marc Andreessen dump millions into some Bitcoin startup, remember that this is a guy who said that Bitcoin gives a great opportunity to reimagine the way the financial system may and must work in the modern Internet era.

Read next: Wayne Shaw: How to Become Famous
Share with friends