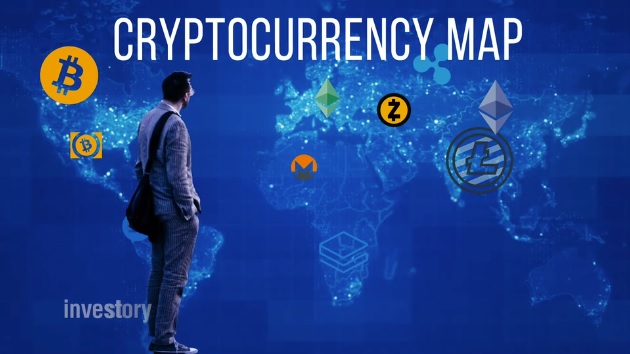 Cryptocurrency Market Map: What’s the Difference Between Bitcoin, Ethereum, Litecoin, and Other Cryptos?

Bitcoin, Ethereum, Litecoin, and other cryptocurrencies all conjure up images of innovative technology for the future, but what’s the difference between them all? On top of that, there are literally thousands of competitors trying to climb the ladder of the cryptocurrency map. Fortunately, we categorized them all to make your life a little easier. The cryptocurrency market map is an easy one to get lost in. There are literally thousands of different cryptocurrencies out there, all with unique purposes. You may be familiar with the market leaders such as Bitcoin, Ethereum, Litecoin, and Ripple. Then, you have the up-and-comers like Bitcoin Cash, Dash, and IOTA. On the lower end of the spectrum, you have hundreds more just trying to make a name for themselves. All of these fall into various categories, and we will unlock the secrets to them right now.

We’re putting Bitcoin in a category of its own simply because it deserves to be. Bitcoin was the first of its kind and has managed to stay ahead of the pack since Day One. Currently, Bitcoin boasts the world’s largest community and development team, the highest market value, and the biggest network hash power.

THE CRYPTOCURRENCY MARKET: COINS WITH MODIFICATIONS

We can all agree that Bitcoin was the first cryptocurrency to hit the market, but not everyone agrees that it’s the best. As a result, a number of developers made their own version of Bitcoin, but with some enhanced modifications. Litecoin, for example, uses a different algorithm than Bitcoin that results in faster and more efficient transaction times. Then, you have lesser known coins like Peercoin, which utilizes extra features to defend against attacks and increase security. Perhaps one of the most creative coins with technical modifications is Luckycoin. Like its name suggests, Luckycoin picks a random reward for mining a block.

THE CRYPTOCURRENCY MARKET: COINS THAT DO ANYTHING

There are coins that try their best to be an improved version of Bitcoin and then you have coins that want to change the landscape completely. Ethereum is a fine example of this. Not only is it a cryptocurrency, but it’s a full-on platform built around the blockchain. Developers can use this platform to create decentralized applications ("dapps") or self-executing contracts called “smart contracts.”

Most of the popular cryptocurrencies are all built around Libertarian ideals such as decentralization and limited money supply. However, others go a different route. Take Freicoin, for example. This coin is designed to actually lose value over time. That way, it circulates faster and discourages anyone from hoarding. Furthermore, it’s controlled by a central organization.

THE CRYPTOCURRENCY MARKET: COINS WITH A DIFFERENT PURPOSE

Not all cryptocurrencies are designed to just be a currency. Some others use the same technology but have a different purpose entirely. Twister is one example of this, and its intention is to be a decentralized Twitter. On the other hand, we have coins like Namecoin, which is a distributed DNS system that acts as an “address book for the Internet” that’s more secure from mismanagement or political attack.

THE CRYPTOCURRENCY MARKET: COINS FOR NOVELTY

Sitting far below the deep, dark trenches of the cryptocurrency kingdom are the forgotten digital currencies. For whatever reason, some people decided to create personalized and novelty cryptocurrencies such as Dogecoin, Pot Coin, UFO Coin, and even a Kanye West-themed digital currency called Coinye. While they certainly have their place in the market, that place is not, by any means, an influential one.

Amongst all of these categories you see here are clone coins. These coins present only minor changes from the coins they attempt to copy and, for the most part, serve no purpose other than to make money for themselves. Modified coins, coins with their own platforms, and novelty coins are just a small fraction of the cryptocurrency market map. Thanks to Initial Coin Offering (ICOs), more startups are able to raise funding for their own, unique innovation. As a result, we are starting to see forks in the digital currency network, which in turn can create even more coins. Even with the growing number of coins and forks creating new categories, each cryptocurrency is still tied to each other within the market. If Bitcoin prices fall, it sets off a chain reaction in the market that causes users to flock to other options. So, when you’re investing in one digital currency, you’re effectively investing in them all. At least there’s never a dull moment!

Read next: Blockchain and the People Connected to It
Share with friends