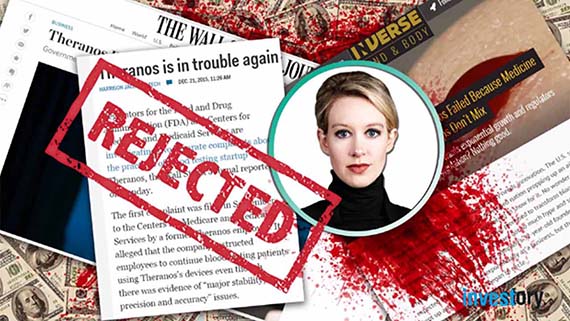 Your health is our wealth

Theranos and Elizabeth Holmes shot to mega status and billions. So, how did they become the business equivalent to Icarus?

The faith of a modern human in scientific achievements is amazing. There is no God, religion is evil, but we need to have faith. As nature abhors a vacuum, films about superheroes and pseudoscientific fiction are rushing to fill in the newly formed void. Why would you want to know how it works? Do not rack your brains! Forget it! Everything is like in a movie! Consume and be happy!

A former student from Stanford University, Elizabeth Holmes had been dreaming of helping people since childhood. She created Theranos startup that offered portable blood analyzers, which gave 240 different test results using only a few drops of blood. How such scientific miracle is achieved is not stated. Secret laboratories are working; leave all explanations for later, and meanwhile – a presentation! Fashionable, stylish, a revolution in medicine!

Investors are bringing their money. The company’s capitalization is estimated at nine billion dollars. Liz Holmes’s personal fortune is estimated at four and a half billions. And there are not any scientific publications. No details. Everything is kept top-secret

Forbes’ investigation has shown that no work is in progress, there is no research, blood is drawn from a vein, not from a finger, some third party equipment is used, and the results lie. Eventually, instead of nine billions, the startup’s capitalization is now estimated at zero. And Elizabeth Holmes is already presenting her new startup. Do not miss it!